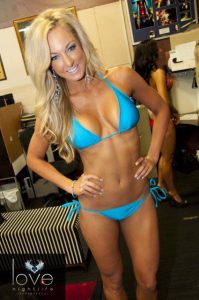 Fitness celebrity Ashy Bines’ net worth might surprise you.

Personal trainers around the world have been able to make a successful living for themselves through health and exercise programs. One of those individuals is Australian fitness star Ashley Bines, who became famous from her Bikini Body Challenge, also known as ABBBC. The international 12-week program provides individuals with workouts and a diet and meal plan. But, was the momentum that started from this challenge enough to maintain her net worth?


Fitness moguls like Ashy Bines make millions each year by sharing their expertise with the world. Through social media and various workout plans, these stars rack in the dollars year after year. Despite collecting millions of dollars, this does not mean their net worth always hits the million dollar mark. In recent years, this is true of Ashy Bines.

Ashy Bines’ most popular program,  Bikini Body Challenge, is priced at $34.95 per week for a 12-month commitment ($1,817.40 total), $39.95 per week for a 12-week commitment ($479.40 total) and $49.95 per week for a month by month commitment ($199.80 per month). In addition to ABBBC, she also sells other online programs and in-person personal training at her gym as well as nutrition products. Not to mention, her YouTube channel has over 65,000 subscribers with more than three million views on her videos along with a reality show called Ashy Bines RAW. Through this media, money can be expected to be made through advertisements on her channel.

The anticipated net worth of the 28 year old exercise expert should be $1,100,000. But, some tax debt reduced her net worth. In 2015, Bines faced court action over $300,000 in tax debt, which was due in 2014, according to Daily Mail Australia. Additionally, she shut down her restaurant, Ashy’s Clean Eating Restaurant, in 2014 after just about a year and only weeks before her Balinese wedding, reported Stephanie Bedo of the Gold Coast Bulletin. Her wedding to Steven Evans was then followed by a honeymoon in the Maldives. The couple stated the restaurant closed so that they could focus on other projects.

Although Bines’ bikini body program gained her many customers and much attention, it unfortunately also attracted many controversies. She was accused of plagiarizing her diet plans from a food blogger, a battle she is still currently fighting. Bines also faced criticisms when her photos were thought to be edited, which was something she admitted to and regretted.

Regardless of her current battles, her self-branded business continues on. With her online programs ranging from $69.95 to $99 (not including periodic free exercise challenges) and in-person training from $21 (“21 dollars for 21 days”) to $19.95 per week at her gym, Ashy Bines Transformation Centre, she continues to work on building a multi-million company with her husband. If she is not careful, though, her business assets and income could be threatened. With her latest reality show, she may be able to win back positive public attention, which could potentially help her net worth improve.

Interested in other celebrities net worth? Check out these other articles.

What are your thoughts? Do you think Ashy Bines can bounce back from her tax debt and increase her net worth?

2 thoughts on “Ashy Bines’ Net Worth”