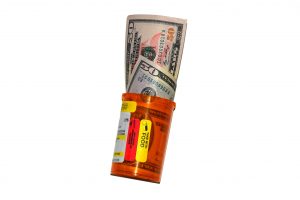 Building an emergency fund is one of the most important financial steps you can make for yourself (or your family).

When you decide on the amount that you want to establish it can feel like a long road before you reach it.

I felt like it took me a long time to build our emergency fund, I wanted that dollar amount in my account but I didn’t have the patience to do it slowly.

I thought if I couldn’t have it all at once in some windfall amount there would be no doing it. I was wrong.

Eventually this is what I did. I just started. Though it didn’t seem like that $20 was going to do anything, within a few weeks that $20 was $100 and I liked that number even more.

I went in with the mentality that if I had enough money for something totally unnecessary, like nail polish or a fancy coffee, I had enough to put in my ER fund account too, if I couldn’t do both I had to pick and ER fund always won.

I can’t say I get windfall money often but I did get a few hundred dollars at Christmas time from my boss that I wasn’t expecting.

Since it was unexpected and thus, un-budgeted, I put it all in my savings account for the emergency fund.

The same goes for change in pay. Since I’m paid hourly and not salary, it varies. I do my budget based on an average amount, if there is more, even just $20 I appropriate it to the ER account while I’m building it up.

Though I prefer to just donate things to people in need, sometimes I may have something of value that I can sell.

The only thing I won’t sell and put in my account is if I sell something of my daughters. Since it was something that either we bought for her or someone else bought for her, it wouldn’t be fair of me to sell for my own profit.

There are a ton of ways to do this from picking up extra shifts at work to earning more through a side-job, of you earn money that isn’t within your regular budget save it until your emergency fund is maximized. Try passive income.

Though this may go under the windfall money category, if you get a tax refund  good use of it would be to beef up the savings!

Once your emergency fund is at a level you’re comfortable with, delegate any of your extra money towards your next financial priority, whatever that may be but don’t do anything else, additional debt payments and all, until you have a realistic emergency fund in place.

How did you build your emergency fund? How long did it take?