Usually when we talk about frugal entertainment, the idea of sitting at home on the couch with a glass of wine will come to mind.  Or if you feel like being social, there’s always the idea of potluck and games nights.

After several nights in, even with friends, one may need to get out of house and just do something outside  It is still the summer after all. With the season being so short over here, one needs to make the most of it and enjoy the good weather while you can. Aside from going to the beach, cottage or camping, people often spend their time outdoors going to the festivals and concerts. While this is all good and fun, you and I both know that these festivals and concerts can get quite pricey. Not only do you have to pay for tickets, you may have to pay for parking depending on whether the festival is accessible by public transportation and overpriced beer and food. 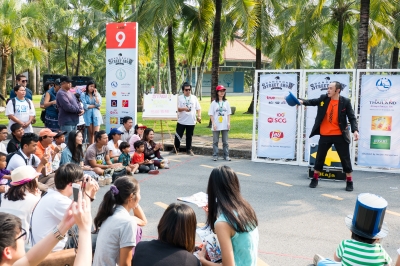 I used to go to A LOT of concerts back in high school thanks to the bank of mom and dad (I know, I was spoiled, but I’m more independent now. I swear). Nowadays, I don’t even consider going to concerts so much anymore. I find the tickets quite expensive  If you’re into that kind of environment, that’s cool. However, I will be in full agreement with my fiancé in preferring to go a concert at a smaller venue, where it’s more intimate. I feel you would be able to enjoy the music more, but then again it may depend on what type of music. You can actually see the musician/performer up close, rather than on the gigantic screen.

I know that this is not a huge revenue generating idea, but I think it would be nice if artists played a few smaller gigs here and there, such as the places they may have been playing at before they got discovered.

A more frugal form of entertainment would be to check out the local street entertainment in the larger cities, because it doesn’t seem to exist in suburbia. You get to listen to mini concerts performed by street musicians for a fraction of the price (basically loose change).  I’ve often heard musicians in the subway which is a nice touch to the hustle and bustle throughout the day. I’m definitely more inclined to give street performers (also known as buskers), my spare change rather than a homeless person because they’re actually working for their money and not just begging for it.

Busking has become so popular that cities even have festivals solely dedicated to busking to draw even bigger crowds. It’s great because you get to many different types of acts: from juggling to miming to breakdancing. It’s usually free to attend and again, all you need is a few dollars. I find it’s worth it and more enjoyable because the acts often involve the participation of the crowd. People get to feel like they are part of the act.

There is no such thing as a nosebleed seat, but maybe perhaps a nosebleed spot, if you are vertically challenged like me. A lot of the times other crowd goers will try and make room for you if it possible.  You won’t feel you’ve lost your voice or become deaf. You don’t have to stay for the entire show if you don’t want to. There’s also that freedom of being able to wander from show to show.

Have you been to a busking festival lately? If you were to be a busker, what would your form of entertainment be?

9 thoughts on “One Cheap or Even Free Form of Entertainment”