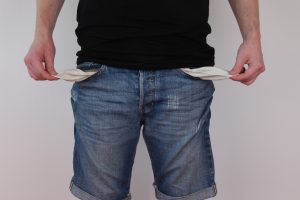 If you’re wondering what financial decisions to avoid, you’ll first need to learn how to go broke. And I’m going to tell you just how to do that.

Seven years ago, I was riding along the struggle bus. It was 2009, and I had just graduated college. The recession affected the job market, and my seasonal work was coming to an end. I barely had two pennies to rub together, and I lived at my mom’s house in an attempt to save money. Despite struggling to find a job in my field for the first four months following graduation, I came to the realization that I was my own worst financial enemy. It was a realization, in fact, that I wish would have hit me sooner.

Surprisingly, accepting a job offer did not solve all my money issues. Indeed, it was only the beginning.

Step 1: Ignore your debt AND get a credit card

During the winter of 2010, I began my first “big-girl” job. Although the pay was not ideal ($10 an hour) with no benefits, I maintained hopes of working my way up, or, in the very least, gaining enough experience to be hired to a better paying position. What happened instead was I had a three hour drive round-trip, I was living paycheck to paycheck, and I was just barely able to pay my bills and gas and maintenance on my car. I had no strategy in place and just kept pushing forward. Then, my car broke down while on the job.

Even though my uncle was luckily able to rebuild it to be a functioning form of transportation again, I accumulated more debt to get it fixed. With more financial obligations upon me, you’d think I would start researching ways to improve my financial situation. This was not the case, though, and my solution was to make more money. More money, I thought, would solve all my issues. I would come to find that I could not be more wrong, but I still had many mistakes to make and even more lessons to learn.

After six months of misery in a dead-end position, I came across an opportunity to work with a start-up. The positives included reducing my driving time, more room for growth and leaving a miserable situation; regrettably, it was a lateral move as far as pay and benefits were concerned. As I started a new venture, I continued to only pay minimum payments on my student loans, after having them deferred for the first six months following graduation. I did not make any moves in paying toward them continuously and had a previous medical bill to worry about as well. Nevertheless, I decided to sign up for a credit card through a retailer after I was told my credit was essentially non-existent when I  began shopping around for a new car. Getting the credit card was not so much the problem, but it was that I was only paying the minimum balance each month instead of paying off what I spent. But, it gets worse.

I should have been saving every penny I could, or at least contributing something to savings regularly. Instead, I was acting as though I did have extra money to spend and would often buy clothes or go out to eat. I was feeding my impulses for temporary happiness instead of my bank account for future freedom.

Step 2: Move to the city and keep the cycle going

Once I did receive a raise from my position after seven months of working weekends plus 40 hour weeks,  I had hope to start to move things on the correct path. Instead, without outweighing expenses versus income, I moved to the city with a college friend and commuted to work. While I did shorten my commute by about 20 minutes, I was now paying rent, regardless of whether or not it was split. I had added an expense on to my shoulders and continued to pay out-of-pocket for all health care costs.

There were nights my roommate and I indulged in the city too much when neither of us could truly afford it. And while we did pay all of our bills on time, we still struggled each month to enjoy extracurricular activities. We were living paycheck to paycheck. I always felt behind and stuck. I was willing to work more but could not find a second job to be flexible enough with my full-time position. Although it seemed like that, too, would have fixed everything, the fact of the matter remained that I was still creating more expenses for myself and not building a foundation. As soon as I started making more money, I had already promised it away. Had we been saving much sooner in our lives, we may have been able to live in a financially comfortable manner.

I am glad I learned how to go broke by experience, but I obviously do not recommend following in my footsteps. It was about four years ago that I decided to get my finances on track. In about two years, I was able to pay off two credit cards, my current car (I was actually able to replace my old Malibu in early 2011 with a newer vehicle), and put away $2,000 in savings. I focused on the debt building up the most interest first (my credit cards) then worked on getting rid of the debt I knew I could the quickest (my car). By making extra payments each month, it was easy to do. Then, following clearing myself of some bills, I put money away each week to savings using the 52-week money challenge. I also made an effort to put in an extra amount each month to savings. Additionally, in the same time frame, I decided to make consistent extra payments toward my student loans as well, as that is my next beast to defeat.

Most notably, though, is how I changed my spending habits. My roommate and I shared our groceries but made terrible lists. We did not budget ourselves and end up wasting more than we anticipated. I stopped doing this when we both left the city to pursue other things in our careers. I was also able to walk mostly everywhere I needed to go in my new location, which saved wear and tear on my vehicle as well as gas money.

When I sat down and took action toward my financial situation in 2012, I made great strides. I’ve had to pay out of pocket for health expenses since then and get to travel each year while still living comfortably. I no longer have to feel guilty about indulging in the pleasures of life because I do so with a better mindset, financial goals and a plan. I have added a supplementary income, but I have also started investing and saving more. And now, I have a cushion to keep me afloat for a short period of time should any financial emergencies arise where I am unable to work.

Only you have the power to change your financial situation. Making more money may help, but it will only be a temporary solution to your overarching issues. Financial growth starts and ends with your mindset. Once you have that focused with a clear plan of action and goals, you can be well on your way to a less stressful situation.

2 thoughts on “How to Go Broke: Financial Confessions of a 20-something”