I grew up living in the suburbs and the suburbs are where I still reside with my family. Especially while we’re just starting out in life I like what the suburbs offer. I have a nice, kid-friendly community, good schools, access to all amenities and close to friends and neighbors. These are all reasons that attracted me to consciously buying here myself, but there are a few drawbacks as well. For me, and this is no surprise, the biggest drawback is: 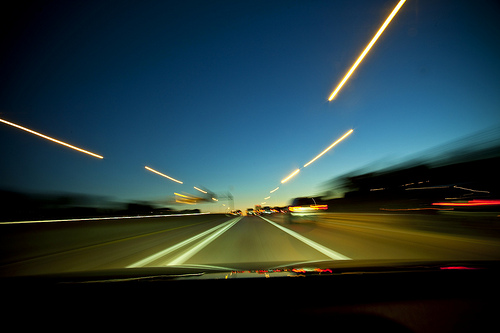 Commuting is a part of my life. I first started commuting when I was still living at my mom’s house as a young adult. I did it for many years during university, where for my entire undergraduate degree, I relied on a combination of my mom, friends and public transit to get me around. I usually had access to my moms vehicle on weekends and after class, and was within walking distance to my job, so it worked. For four years I got away with not needing a vehicle of my own. By the time I started my second degree though, my schedule was too demanding and using public transit wasn’t working. I bought my first car for $750 and drove it for three years with very little money going into it beyond regular maintenance. I lucked out with that old Corolla.

When my husband and I got our first apartment together, I made the decision to sell my little car for $800. Did we really need two cars? With my husband’s then crazy travel schedule, usually driving, we really could have benefited from two vehicles but we made it work. It helped that we had many friends and family that were around to help me when he was away.

Many years later, we’re slowly approaching a ”should we get a second car?” bridge.

Both my husband and I commute to work. We’re a one car family and because of our work locations we had to decide when we bought this house (in the ‘burbs) if we buy a second car or me rely on public transit. Given that I work during peak hours I can commute via public transit fairly efficiently. It does require a drop-off and pick-up spot from my husband but we make it work, for now. There are many days I wish I could just hop in my own car and drive to work but then am quickly reminded about everything else I’d have to deal with. The stress of driving in rush hour traffic, the cost or parking, the gas, the associated costs of owning a second vehicle…the list goes on. Until we absolutely have to, and I know we will eventually get there as our family grows, we will maintain our one vehicle household.

We will never live in the city. If anything, we will move further out in the suburbs or country. Somewhere I can feel safe yet not see my neighbors. Somewhere where we will absolutely need two vehicles as long as we maintain the jobs that we currently have. Living in the suburbs has many advantages but one big disadvantage, for us at least, is the commute. I think this is a situation where the pros much outweigh the cons. I’d much rather have our house, land, school zones and amenities with a commute than less space for my money, busy streets and no yard.

The suburbs aren’t for everyone that’s for sure but for me, I love it. I can’t imagine calling any other place home. Even if it takes me an hour to get to work.

Do you commute to work? Would you get a second vehicle if it meant saving 45 total minutes every day?

29 thoughts on “Living in the Suburbs: The Commute”