If I were to rank actual gifts, cash and gift cards, cash would be first (obviously), then gift cards and actual gifts would come dead last. The only gifts I really enjoy receiving are handmade ones.

A lot of people don’t like giving cash as gifts if they’re not relatives of the recipient or if it’s not a very special occasion such as a wedding or a baptism. Others think that giving cash is too impersonal. I would personally rather get cash because I find it offers more flexibility than a gift card. 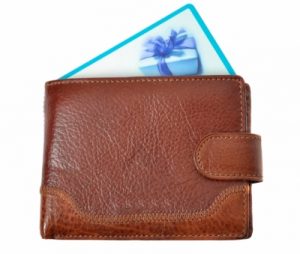 Nowadays, there are gift cards for pretty much anything and everything. You name it, there is most likely a gift card for it. At first you had to go to the actual store to buy the gift card, but grocery stores, drug stores and gas stations tend to carry a whole assortment of gift cards. This makes it more convenient because you can pick up a gift card while you are doing your regular shopping or filling up on gas.

Before I looked more into it, I assumed the Prepaid Visa and MasterCard were just like gift cards, except they were issued by Visa and MasterCard. Depending on the card, they tend to have extra fees such as an activation fee or a fee is charged to the purchaser. They are nothing at all like gift cards because either the giver or recipient ends up having to pay extra money initially just to use it .

The great thing about gift cards is that you don’t pay any tax on them (at least I have never had, in my experience) and they don’t expire. If you get a gift card to a place you know you will never go to, you can always sell them on eBay or Cardswap.ca. With Cardswap.ca, as the name implies, you can also swap the gift card you don’t want, with one you know you will actually use.  Personally, I have never sold gift cards because I usually receive gift cards from stores I shop at. However, it’s good to know there’s a way for other people to use them, rather than just taking up space in your wallet.

Now for the downside, or sort of downside with gift cards. Certain gift cards only come in $25, $50 or $100 denominations. Depending on your budget, what if you wanted to spend a different amount other than the ones listed above. You may find $25 is too little, but $50 is too much.  I guess you can always find a gift card from a place that allows you to put any amount on it instead.

You’ll often end up with a balance on your gift card with your purchase and the store won’t reimburse you for the three dollars. You can always put it towards your next purchase and use the remaining three dollars. So you have to make ANOTHER purchase with your OWN money.  Or you’ll end up using the gift card entirely and adding some of your own money to it, which isn’t as bad. Either way, you’re still spending some of your own money. Imagine if you had used that prepaid credit card for the purchase. You would have used your own money twice!

I ask for gift cards from certain stores I like because it gives me an excuse to shop there.  I never needed any of the stuff I bought with my gift card, but it was like giving myself a special treat. Lately, I have been giving more thought as to what gift cards I would want next time my birthday or Christmas rolls around.

Rather than asking for gift cards of places I want to shop at, I’m going to ask for gift cards for places that I need to shop at such as grocery stores, gas stations, Home Depot, Shoppers Drug Mart, etc. That way, I’ll be able to use less of my money for the things I actually need, which is even better.  Two big areas of my budget, gas and groceries would be greatly reduced, thanks to gift cards.

I know it seems so simple and I’m not even sure why I didn’t think of this until now. I guess with gift cards, I automatically thought of them as money more towards “wants” rather than “needs”. In doing so, I’m not spending extra money on things I don’t need, which I find gift cards tend to encourage, especially restaurant gift cards. How many times have you gone to a restaurant with a gift card, thinking you can pay for it all, but forgetting to take into account tax AND tip?

What’s your take on gift cards? Do you love them or hate them?

18 thoughts on “The Downside of Gift Cards”