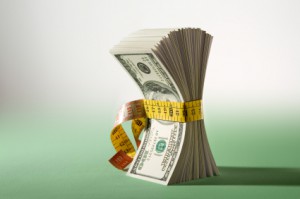 If you’ve ever spent any time trying to figure out how to drop a couple of pounds, you’ll know what I mean when I say that there are hundreds of fad diets out there. Everything from consuming nothing but water with cayenne pepper in it for days on end, to smelling foods but not consuming them. Fad diets are everywhere.

There are fads for everything; fashion, beauty products, even food (right now, it’s sriracha and everything being on a stick or in mason jars). Unsurprisingly, there are also money fads. A few of the more interesting ones are below:

I remember being younger and my mom freezing her credit card – literally, in a block of ice – to prevent herself from using it. This was back when online shopping and online banking didn’t exist with as much prevalence as it does now. Because you don’t physically need the card anymore to make purchases with it, this method definitely wouldn’t work in  today’s day and age.

It worked great for my mom, temporarily, however, to curb impulse shopping with money that she didn’t have at the time.

Hypnosis was popular recently for people who wanted to stop smoking or lose weight, but it was also a popular financial diet to stop people from spending money they didn’t have on things that they didn’t need. In fact, people were using hypnosis for a lot of purposes a few years ago.

I don’t know that this fad is completely out yet, but spending fasts were many people’s preferred way of saving money in the last couple of years. They challenge themselves to not eat out, or to not spend frivolously for a period of time. I thought this may have been just a fad in the personal finance realm, but apparently not. A couple of friends of mine from two completely different sides of the country both posted on Facebook about their spending fasts in the last few months.