Let’s look at whether or not real estate is still a good investment, shall we?

In the 1980s, real estate was booming in certain parts of Canada. Sure, interest rates were incredibly high (though not as high as they would become in the early 1990s), but housing could be acquired for a low cost, and due to the high level of immigration that was being experienced at that time, rentals were snapped up left, right and center.

My parents purchased a fixer-upper duplex that they renovated in the Lower Mainland area of BC for $70,000, and held it for a year before they sold it for almost a $100,000 profit. While they held the property, they lived in part of it, and rented out the other part, creating a situation for themselves there they didn’t have a mortgage. 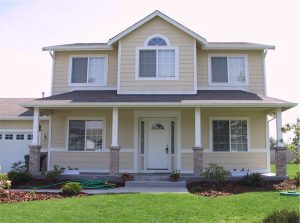 Was real estate a great investment for them? YES.

They went out to buy and sell property three times over thereafter. One house they purchased in 1992 for under $100,000; they sold it when the market wasn’t great in a town that hadn’t grown into it’s britches yet, so they didn’t make much of a profit off of it. When the house sold on the MLS a couple of years ago, it sold for $1.1M. That is some great passive income!

That’s yet to be seen, but I think we can all agree that housing isn’t as great of an investment as it was 25 years ago.

Housing isn’t an amazing investment unless you can buy it for low and sell it in a short period of time for a much higher profit.

Over the 5 year term of your mortgage, you spent more than $73,000 on interest alone –this isn’t paying down your balance, it’s just on interest.

Now, think of it like this. Say it’s a four bedroom, three bathroom home, in a relatively desirable neighbourhood close to transit and amenities. It has a big yard, and to rent the home, it would cost $1900/month, not including utilities. You’re spending $22800/year on rent, which equals $114,000 over the five year term if you had merely rented the house instead of owned it.

Even if you sell it at $450,000, you would still be coming out ahead compared to if you rented.

What you’ll really be seeing a difference in, for this situation, if you owned the house, is in the maintenance, property taxes, and other costs that come along with home ownership.

Housing as an investment also depends on where you live. If you live in the US, it is more likely to be a good investment than if you live in Canada, where many people consider the housing market to be “in a bubble”.

Is housing a good investment in your area?

17 thoughts on “Is Housing Still a Good Investment?”