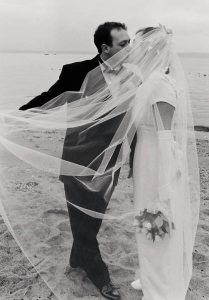 In July, my husband and I tied the knot.

And like any couple, we wanted to start our marriage out on the right foot.

In marriage prep, we learned about some of the biggest challenges in marriage. These challenges test your partnership and if you don’t already have a strong foundation can weaken your bond with one another.

Many of these challenges are brought on by beliefs that we hold because we don’t know any better. Or because we see our parents hold these beliefs and attitudes, and we pick up on them. Or just because we’ve been exposed to beliefs like this over and over again in our culture.

No matter how these beliefs are adopted, they undeniably damage a marriage.

So do you hold any of these beliefs?

1. If Only We Had Enough, We’d Stop Fighting…

Have you ever thought that if only you had enough money, you’d be happier, less stressed out? That your marriage would magically get better, and you’d stop fighting?

Because you wouldn’t have anything to fight about, right?

If you’re already arguing about money, having more of it won’t switch the argument stream off. It will just shift the tension to another area of your marriage.

Why? Because money isn’t really the issue, usually. More often there is something underlying the money arguments.

For instance, if you are frustrated with your husband’s spending habits, the underlying issue may be that you have conflicting goals.

If you argue about purchases made in secret, the underlying issue is trust.

Work on both earning more money and working on the underlying issue behind your arguments.

2. We Shouldn’t Fight About Money

We’ve all heard that money is the number one cause of divorce in North America.

So it stands to reason that you shouldn’t fight about money with your spouse, right?

Since it leads to divorce, it sounds like the last thing you should do.

But that’s simply not true.

Arguing about money is not evil. It’s how you navigate money as a couple that can break down a relationship.

You are two different people. You aren’t the same, so you are going to have different attitudes, goals, and beliefs. It’s only healthy to have differences. There isn’t one couple alive that is always on the same page about money.

You just need to be able to work out the issues in a productive way.

Because if  you just sweep the issues under the rug? They’ll fester like a wound, which is far more damaging than a healthy debate.

3. We Aren’t Partners if We Don’t Have Combined Finances

When we were about to get married, I was told by more than one couple that if we didn’t combine our finances completely, we weren’t in a partnership.

How could we go about being married if we didn’t share everything: money and all?

While my husband and I did combine our finances, I don’t subscribe to the idea that you’re not partners if every single aspect of your lives aren’t intertwined.

This is like ridiculously arguing that if you don’t have the same name as your kids you aren’t a family.

Assuming a marriage isn’t as strong just because finances aren’t completely combined is an indication of an insecure marriage.

So if you want to do things a little differently, do whatever works for you and your spouse.

You’re no less married if you don’t follow the herd.

Before J and I got married, I unfortunately believed that everything should be equal.

Meaning, if I spent $40 on a dinner out with a friend, he should spend $40 on something that he wanted, and vice versa.

So when he went out and bought a new speaker for his truck, I’d think “OK, now what should I do with that extra $100 of spending money?”.

Luckily, I have snapped myself out of this silly mindset.

You’re partners in crime, not competitors. And there’s nothing that will drain your bank account more quickly than this “tit for tat” attitude.

Some couples battle this by allocating a portion of their discretionary spending to each member of the couple, like an allowance. Some just spend as it comes up an don’t take a tally.

However you deal with it, remember that you’re not in a race to drain your bank accounts.

Nobody is perfect, especially in marriage. And sometimes, the best we can do is to recognize these attitudes in ourselves and try to fix them.

So next time you find yourself thinking any of these things, stop and remind yourself of the damage these beliefs can cause.

10 thoughts on “4 Common Money Beliefs That Damage Your Marriage”