Aside from hockey, the game of golf can be the most expensive sport to play. You have to purchase golf clubs, shoes, gloves and other golf apparel.  There are also green fees to pay. Some golf courses require you to rent a golf cart. Let’s not forget the social aspect of golf, so you may end up adding alcohol to the list of expenses.

I have played a round of golf once in my life and gone to the driving range twice.  Due to my lack of patience and abundance of frustration, I never bothered to try the sport again.  I felt I was this close to pulling a Happy Gilmore. Like all sports, it’s all about technique, but I wasn’t willing to try to learn the technique. I found golf rather boring. It amazes me even more that people can actually watch golf on television. 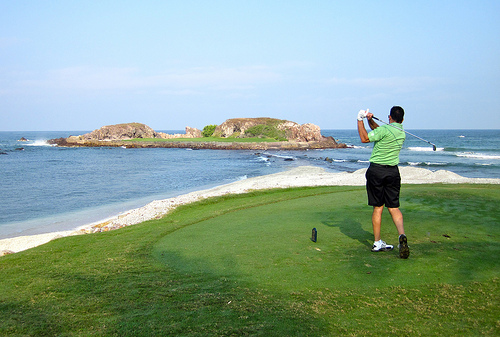 I think I’ll stick to miniature golf instead.

What amazes me even more is the amount of people play who play golf. Quite a few people at work, including my boss, play golf. So there is a lot of golf talk around the office.

Golf is a Networking Sport

An ex-boyfriend of mine once told me that I should learn to how to play golf. I just gave him this weird look and asked, “WHY?!?!” He told me that the golf course is where connections are made and that it is a good place to network.

Initially I didn’t give his advice much thought, but thinking about it now, it makes perfect sense.

As I mentioned before, golf can be a rather expensive sport to play, thus people with higher incomes are likely to take up the sport.  The town I live in is considered one of the most affluent communities in Canada. Interestingly enough, it is also home to several golf courses/clubs.

There does seem to be somewhat of a link (no pun intended for all you avid golfers) between wealth and golfing.  However, that’s not to say that people with less than six-figure salaries can’t play the game either. There are both private and public courses available.

According to Mike Moran, from Life on the Buy Side, “Golf is by far and away the most common sport played by anyone is the business world.”  Unlike formal business events where networking can be a little more awkward and somewhat forced, golf provides a more relaxed environment. I’m not aware of other sports in which you can drink while playing. The fact that it’s a slower paced game than most sports may help. You never hear of people making business deals on the soccer field or on the sidelines of the basketball court.

Squash is Also a Networking Sport

Although it may not be as obvious to some, but based on my observations at the gym, it seems like squash is also a business game.

For one thing, squash may be a slightly cheaper business game to play because you only have to get a squash bag, racquet, ball and a pair of squash shoes.

I have noticed a lot of men (and a few women) walk into the gym with their business suits and giant squash bags. There are several armchairs in front of the courts in which players and non-players alike can chat and watch the game in action, therefor giving ample opportunity to network and make that connection.

It’s one of those games where single players can find other players looking for a game. Sometimes I’ll see three guys playing in the same court, taking turns hitting the ball throughout the game.

Since it’s a game played indoors and can be played year round, perhaps a lot of golfers are squash players as well? And maybe vice versa.

Do you play squash or golf? If so, have you been able to make any connections from it?